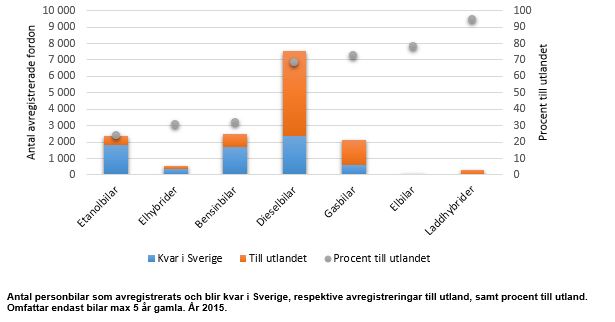 The development towards a fossil-fuel independent vehicle fleet goes slowly. The economic incentives contribute to new sales of cars with alternative fuels to businesses and governments. But the secondary market is abroad.

A transition to alternative fuels is necessary if we are to achieve our goal of a fossil fuel-independent vehicle fleet by 2030.

According to this new report from Transport Analysis, growth in the number of vehicles powered by alternative fuels has been low, despite a comprehensive package of policy instruments and incentives intended to boost their sales. This low growth is attributable to the sales of ethanol-powered vehicles having ended, even as sales of electric cars, electric hybrids, plug-in hybrids, and natural gas-powered vehicles are insufficient to offset the lost ethanol vehicles.

In the case of natural gas-powered vehicles, the rate of growth is also inhibited by the fact that many such vehicles are deregistered each year because they are leaving Sweden. This trend has been growing over the last four years. This trend currently pertains to relatively few vehicles, but if sales of natural gas-powered vehicles should increase and foreign sales follow the same pattern, a significant number of environmentally friendly vehicles could be sold abroad, reducing their contribution to the share of environmentally friendly vehicles in the Swedish vehicle fleet.

A clear majority of the exported cars was relatively new, most of them not even five years old, and 90 percent of them were owned by companies. It is thus primarily service and company cars which are being sold abroad after a few years. As a result, there’s a risk that cars that have been the subject of fiscal incentives in order to increase its share of the vehicle fleet are not available at the Swedish second-hand market. The intended effect of the fiscal incentives might be weakened because some of these vehicles quickly leave Sweden. There is also a risk that the forecasts that form the basis for decisions on instrument design is based on false assumptions about the Swedish car fleet development.